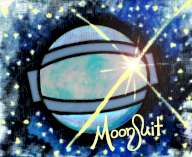 There’s a painting of a spaceman floating through the cosmos in MoonSuit’s San Francisco rehearsal studio, and that beneath the suit, our vintage style voyager somehow appears to be in some state of transcendent bliss.  Nothing could be more apt.  It’s not just that the band’s aesthetic stemmed from such an image, it’s also that the sound created by the Bay Area ensemble is fertile ground for the cultivation of such a feeling in humans of the terrestrial and star-bound varieties alike.
That MoonSuit fell into league was perhaps written in the stars.  The core of the band performed as Koala Tea, and after one particularly well-brewed show in May, 2017, the bassist from the opening band was sufficiently impressed that he took the departing marsupial’s place.  Individually, musicians in MoonSuit have toured nationally and regionally, gigged at some of the most notable venues in the San Francisco Bay Area, and played with musicians at the top of their respective scenes on both coasts.  The band’s collective experience and musical taste is incredibly broad, with members’ ages spanning three decades. Together, though, the musicians coalesce magnificently.
This certainly isn’t about fortune and glory. The band got together and played - originally Grateful Dead covers - simply because they wanted to jam, because they couldn’t imagine a life where they were not making music.  When the core of the group convened in late 2015, their weekly jam sessions were nothing more than an outlet for expression, creativity, and joy.   As things progressed and Taus, the band’s primary songwriter, prompted the group to take some of his compositions for a spin, the band came around to the fact that it would be a tragedy to not share what was being made.  The band is still able to pay appropriate tribute to the Dead on occasion, but the sound that has developed is purely their own
Like their totem spaceman, MoonSuit’s music is a living juxtaposition: adventurous yet familiar, untethered yet literate, grounded yet transcendent.  They think they might sound like something you might hear in the hi-fi of a spaceship from the 70’s, although nobody’s exactly sure what that means.  It’s indicative of how the band operates: feeling good is everyone’s primary objective, and the stars are the limit.  Musically, what comes out is a product of the incredibly wide listening habits the band holds: improv rock, gritty funk, textured ambient soundscapes, upbeat bluegrass, classic jazz, moody ballads, and well-crafted 70’s, 80’s, and 90’s pop all have a place in MoonSuit’s set. The music is layered in its appeal; first time listeners and trained musicians will both find something to hook into.  And somehow, almost impossibly, there’s room for all of it.  It’s adventurous, it’s infectious, it hints at some possible path towards transcendent bliss...even for the terrestrials among us. MoonSuit loves the music they make, and they are sure you will too.
Band's Official Website
RIGHTS
On February 10, 2018, permission was granted to the LMA:

I'm writing on behalf of Moonsuit (www.reverbnation.com/moonsuitmusic), a new San Francisco based band. The band would like to make publicly available on Archive.org's Live Music Archive. The band allows recording of all concerts, both audio and video, provided that recordings are made available for free and that nobody outside the band is making a commercial profit from such recordings. If the band decides to release a recording of a concert and sell it for commercial purposes, that recording should not be free to distribute or trade (other recordings of that concert would be fine to trade). The band reserves the right to identify which recordings and which performances this applies to down the road. As of now, though, MoonSuit encourages the free trading and distribution of all concert recordings!

Thanks and best,
David Taus